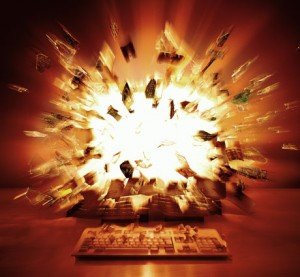 In 2015, U.S. Cyber Command contracted out a $460 million project to the private sector to produce “lethal cyber weapons” – logic bombs with the ability to cause critical infrastructure to self-destruct. In June, the Department of Defense released the “Law of War Manual,” which contains a chapter on cyber weapons and three potentially lethal ways of using them that they consider legal: triggering a nuclear plant meltdown, opening a dam upstream from a populated area, and disabling air traffic control services.

The possibility that cyber weapons may kill civilians is acknowledged throughout the document, but accepted in cases where there is confidence that the weapon will work and cause no harm to our own troops. The possibilities for non-violent collateral damage are high as well, as weapons like the Stuxnet virus have already taught us. Even while it’s acknowledged that the primary cyber event may cause civilian casualties, many point out that secondary effects – those on hospitals and other basic services – may be even more lethal, and unexpected.

It’s important to note that such weapons will not be used by the U.S. indiscriminately, and that this move is partly a reaction to other state actors developing the same kinds of weapons. In addition, the rules governing lethal cyber attacks are the same of those applied to dropping a bomb.

Many of the ethical issues are the same one we’ve faced throughout history, including during World War II when we dropped the atomic bombs on Japan. What sort of delicate math is required to show that the outcome legitimates the means? What kind of violence is acceptable to protect the lives of domestic soldiers and citizens? This issue also answers some of the questions (at least for the U.S.) posed last year by our entry on state-sponsored hacktivism: What if the aggressors are non-state actors? Can we employ these tactics in self-defense? Who can be attacked in a cyber war?